Pink is for Girls, Blue is for Boys 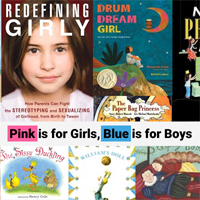 Long before becoming a parent I read a book that would forever influence how I raise my children,  Redefining Girly: How Parents Can Fight the Stereotyping and Sexualizing of Girlhood, from Birth to Tween, by Melissa Atkins Wardy. Essentially it brings to light what we all see on a daily basis; all-pink aisles in toy stores, dolls that offer an unattainable and fabricated image of beauty that is far too sexual for any young child, and clothing that either sexualizes a child much too soon or has messages such as “Daddy’s Little Shopper”.

Having grown up a tomboy myself I always knew I wouldn’t be dressing a daughter in the obligatory pinks and purples and giving her only dolls or watching my son dressed in blue while he played exclusively with trucks or balls.  Now as the mother of both a girl and a boy my perspective has become much more real.  My daughter does play with dolls and she does wear pink, but more importantly she is given a choice and most days she chooses to play basketball and wear her Snoopy hockey tshirt.  At the same time I hope to raise my son among dolls and other stereotypical “girl toys” as well as the traditional “boy toys”.  There is so much more that I want to say but basically it comes down to is I want both my children to have the same opportunities to become whatever they want to be in this world and to never doubt themselves, their abilities, or their beauty.  Whether they fit into stereotypes or not I want it to be their choice.

March 8th is International Women’s Day, a global day celebrating the social, economic, cultural and political achievement of women.  To honor and celebrate this day specifically for the equality of genders on all spectrums we are highlighting The Mildred L. Batchelder Award, named after a librarian who fought hard for the rights of minorities and women as well as the Amelia Bloomer Top Ten List of feminist books for young readers.  Additionally, please explore the below list of picture books that challenge gender stereotypes.