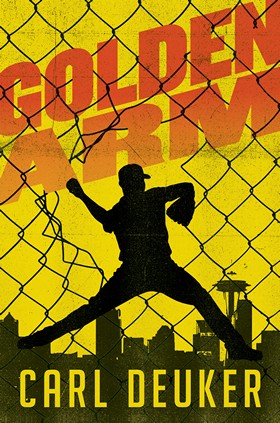 Lazarus “Laz” Weathers doesn’t have much going for him; he doesn’t have a father, he lives in a worn-out trailer park, he’s mediocre in school, and he’s got a stutter. What he does have is one heck of a pitching arm and a keen understanding of the game of baseball. Unfortunately, he goes to a “tough” high school with a weak baseball team, so it’s virtually impossible for him to catch the eye of talent scouts from colleges or, better yet, the major leagues. But when a new principal decides to get rid of the team entirely, Laz discovers there’s a workaround rule that will allow him to pitch for another school. Suddenly, Laz finds himself on the other side of Seattle, in a school where kids are college-bound, and the baseball team has a real shot at the state championship. It seems like there’s an actual chance for Laz to escape his old life, but does that mean leaving his half-brother behind in a world of poverty and drugs? There’s plenty to love about Deuker’s latest heartwarming sports story. Baseball enthusiasts will enjoy the detailed descriptions of America’s favorite game, and everyone will fall in love with the gentle but wise Laz. While others around him get sidetracked by temporary pleasures, Laz stays focused on his long term goal of a career in baseball. Along the way, he encourages those around him to be better, not only at the game of baseball but as human beings. If his sudden rise to success seems a little too good to be true, and the test of his character a little too predictable, it won’t stop readers from cheering him on, and hoping that life rewards this truly good kid.