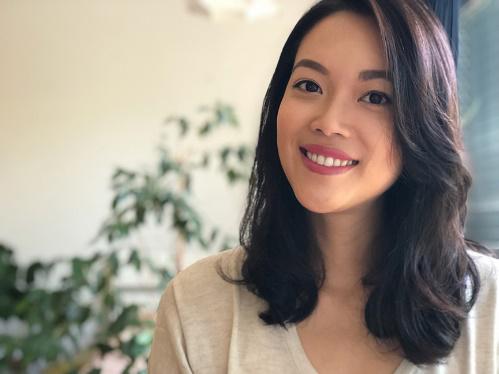 Illustrator of 8 picture books, Vivian Mineker creates magical settings with beautiful characters that enhance an author’s words in a way that the reader immediately feels immersed within the pages. Her work takes on an airy feel that provides vibrant color, imagination, and comfort. In Vivian’s recent book, The Road Not Taken , she brings to life Robert Frost’s 1915 sparse poem. Vivian invites readers to walk the path with a little red-haired boy and his dog as he makes an important decision- which path to take. Capturing the weight of the decision through varying perspectives and beautiful spreads, Vivian proves she is an illustrator ready to embark upon any story or poem.

Vivian, tell us about your journey to become an illustrator.

I have always been very into drawing and painting as long as I can remember, and I’ve always wanted to work with art in some capacity. When I was little, I was really into cartoons, Disney, Looney Toons, Cartoon Network, and anime/manga, etc. So, for the longest time I wanted to become an animator, ideally working for Disney. After high school, I went to the Art Institute of Portland and got a degree in animation. However, after graduation I got sidetracked when I was hired at Nike as an intern (doing animation at first, then transitioning to video editing) and subsequently as a full time employee. It was a great place to work with wonderful people and a wonderful environment, and I was very comfortable there for many years. Then I slowly became dissatisfied with the actual content of my work there, it wasn’t what I wanted to do, and I was growing away from art. So eventually, I decided to quit the job and try my hand at illustration (which fits perfectly with my ideal vision of drawing all day for a living), and that’s where it led me today.

What do you like best about illustrating picture books?

I love bringing words to life. When I get a manuscript, they’re just text on paper, and the challenge of transforming those texts to life visually is what I like most about drawing picture books. When I was in elementary school, we’d have these regular art assignments that tasked us with illustrating a scene from one of the poems we just learned in class. I have fond memories of trying to interpret the poems and figuring out how to convey the scene and the meaning visually — it was quite a challenge sometimes, but I always really enjoyed it. That’s the same feeling I have about illustrating picture books — studying the text, interpreting its meaning, visualizing the scenarios, and bringing that to reality in a way that most efficiently convey the ideas to the audience.

Have often are you given free range/freedom to interpret with your illustrations?

The freedom I get for the illustrations really depends on the project. I would say that about half of the time, I get to decide most of what goes on with the illustrations, meaning that I come up with the layout and composition, as well as the character designs and colors/tone of the illustrations. Sometimes the publishers already have a pretty solid vision in mind that they’d like me to work within the scopes of, but it’s actually less frequent than the other way around.

What book have you had the most freedom with your illustrations?

The most freedom I’ve had was working on “the Road Not Taken” by Robert Frost with Familius. In that case, the words are from a well-known poem, which is also quite short. So, when we talked about how to turn the poem into a full book, I was given the idea that the illustrations would create a parallel narrative to go along with the short text — essentially coming up with a whole story to be told purely visually, while the poem is layered on top. To achieve this, I was given full reign on what that story would be and how to best tell it. It was quite a daunting task at first, because I love the poem and I wanted to do it justice with the right illustrations. Eventually, I think it turned out very well, and I’m extra proud of it because of how much freedom I got to work on it. It almost felt like a personal project, which I took immense pride in.

Your illustrations feel so full, so much like a world of their own. CLCD is a big fan of your work! How long does it take to complete the illustrations for a picture book?

Thank you! It really depends on the book. Some books require full spreads throughout, and some just want spot illustrations, so the time I need greatly varies. For a typical 32-page book, usually from start (talking to publishers, getting ideas ironed out, etc.) to finish, it can take about 4-6 months, with actual painting (full color) time about 1-2 months.

Digital illustration is definitely a crucial part of my process, as my illustrations are about 50% digital right now. For a typical illustration, I paint with watercolor or gouache on paper, getting most of the illustration done that way, but without details like the fine lines and faces. Then I scan the drawing in, adjust colors, fix mistakes, clean up the edges, and add all the details in digitally. This is how I achieve the look of a clean illustration, but with some texture of traditional mediums.

Do you have an author or two that you would love to illustrate their books?

I would actually like to do more books based on poems. As I mentioned before, I really enjoyed interpreting scenes and meanings from poems, and the vivid imagery some of them provide makes me excited to draw them. Robert Frost has some more very nice poems that I would like to do, but I’m also open to many others, of course. As far as a specific author, I’ve always wanted to draw the worlds created by Neil Gaiman. They’re so imaginative and original, and it would be really fun to draw something for his works.