Author Interview: Kathy MacMillan and Manuela Bernardi, authors of She Spoke: 14 Women Who Raised Their Voices and Changed the World 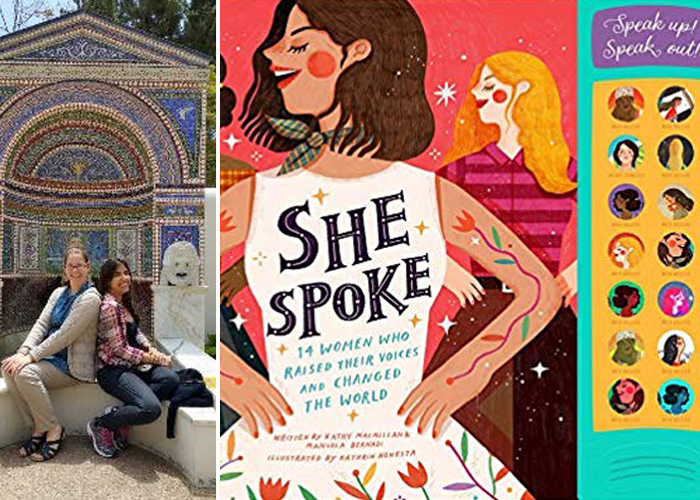 She Spoke: 14 Women Who Raised Their Voices and Changed the World hit store bookshelves on March 1. At a time in history when so many women’s voices are finally being heard, this picture book biography takes a look at women trailblazers who paved the way for today’s female voices. We are so pleased to share with you our interview with the authors in honor of International Women’s Day (March 8) and National Women’s History Month.

How did the two of you meet and decide to collaborate on this book?

Manuela: Kathy and I met over a decade ago, when she was randomly assigned to be my writing mentor on a Harry Potter fanfiction site. I was a Brazilian teenager in Rio de Janeiro who was trying to write in English for the first time, and she was an awesome librarian and American Sign Language interpreter near Baltimore, Maryland. We clicked immediately — her feedback was invaluable and we loved each other’s stories. We fell in “writerly love” and became friends despite the distance. Over the years, we read each other’s stories and wrote together a couple of times, communicating via email and instant messages. We finally got to meet in person in 2013, when I began my Writing for Screen and Television MFA program at the University of Southern California. We were still living on different coasts, but we were grateful for the few times we managed to hang out together during the two years I spent in the US.

Kathy: We continued to share all of our work with each other. We are each other’s biggest cheerleaders and toughest (constructive) critics. Manuela’s feedback on my young adult novels, Sword and Verse and Dagger and Coin, was crucial. She even came to the US to celebrate the launch of my debut novel with me! When Familius Press offered me the chance to work on She Spoke: 14 Women Who Raised Their Voices and Changed the World, I knew right away who I wanted my co-author to be. I told them about Manuela and her screenwriting accomplishments, and Familius quickly agreed to bring her on board.

Was it hard to narrow the book to just 14 great women?

Kathy: We started our research by looking for appropriate audio clips, so the availability of the sound clips narrowed the field somewhat. Even so, we still had a lot of back and forth before settled on the final list.

Manuela: It was even harder because we knew we wanted the selection to reflect the fact that, across the world, there are so many different women speaking out about so many different causes, but the clips had to be in English! Do you know how hard it is to find international women speaking out in English, in clips that we could get permission to use?

Manuela: Even so, there were so many incredible women we wish we could have included. We have listed some of them at the end of our book, with more information on our website: https://tinyurl.com/shespoke. But it still doesn’t scratch the surface.

Your book pays tribute to some impressive women and provides something exceptionally unique- audio clips from each female changemaker’s speech. What added impact do you think this will make on young readers?

Kathy: So many wonderful books have been published in the last few years highlighting amazing women and their accomplishments, but we feel the audio clips really set this book apart. There is nothing like hearing the passionate words directly from the source.

Manuela: It is so powerful to hear the actual voices of these women speaking out on important issues, when women have been silenced for so long. And that is vital for everyone to hear. Our book is geared to ages 8-12, but the audio clips make it accessible for younger readers and add interest for teen and adult readers as well. Of any gender.

Manuela: It’s writing, of course! Isn’t it writing for both of us?

Kathy: I was going to say communication – but that’s related, so I guess that counts! I don’t think there is anything more important in this world than being able to express yourself and honor and respect others who are expressing themselves. Writing is one way to do that.

Manuela: Oh, fine! It’s still my favorite way but working on this book has made me aware that I should be using my voice in the literal way more often too.

What advice would you give young girls for their voices to be heard?

Manuela: Speak out! Don’t be afraid of sharing your voice and your views. And listen to other women and girls when they speak. If we support each other, we can do so much more together. Anyone, no matter their gender, can learn to listen more so that everyone has a voice.

Kathy: Don’t give up, no matter what. Girls are often given the message that they have to tone down their passions or that they will only be heard if they express themselves in soft, “polite” ways. But if girls and women – and allies of any gender – become aware of this and challenge those expectations, we can quite literally change the world.