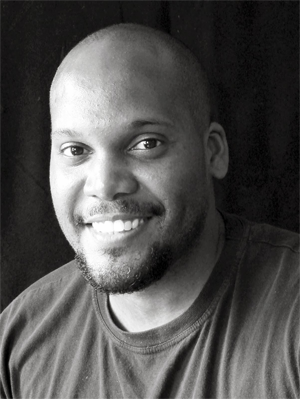 R. Gregory Christie has made quite a name for himself in the world of children’s literature. He has been a Coretta Scott King Illustrator Honor recipient five times and has received numerous other awards for his illustrations.

I recently had the pleasure of hearing R. Gregory Christie speak at a literature conference, and later that evening attended one of his famous Paint Nights. Christie’s calm demeanor and patient teaching set even the most nervous, new painter at ease at the event. I wanted to know how this talented artist, who hosts paint nights and drop-in art sessions at his GAS-ARTS Gifts Autographed Children’s Bookstore in Decatur, Georgia, got his start illustrating children’s books. Check out more of Christie’s award-winning books here.

What was the first children’s book you illustrated and how did you land the job?

My first book was The Palm of My Heart: Poetry by African American Children published by Lee and Low Books back in 1997. It was during a time when I was working heavily as a freelance illustrator mainly doing magazines and record covers. Children’s books were not on my radar before then, but through good luck and fate, Lee and Low gave me a shot.

That first book won a Coretta Scott King Illustrator honor. It’s amazing to think about now and hard to believe it came from an album cover called Summer in the City, by the group Justice System. That record cover came from my days of live painting in night clubs where I met the members of that group. When they got signed to MCA records, I got signed as their illustrator. So, in short I landed the job by painting in New York City nightclubs.

How long does it take to complete the illustrations for a picture book?

Psychologically it can take years. The impulse to just get started often isn’t there. I fill the time with organization and cleaning, resting up for the next big day of painting that sometimes doesn’t come, or lastly, getting on top of that social media. All this until the anxiety is too much and I must get started. As I get in to it, I always am kicking myself for not starting sooner. However, when it comes to physically doing it, I’m lightning fast. I mostly do each of the paintings within a day. I’ve been painting since I was 8 years old, so after all this time it’s as natural as breathing.

Your illustrations really resonate with children.  As a child, was there a person who encouraged you in your artistic abilities?

I was always and often continue to be a loner. I encourage myself and see this as a time to build a world. It’s often shocking to parents when I tell them that they do not need to encourage a young artist. The need to do art is already in them. Take away the pencil and paper they’ll be doing chalk drawings outside on the sidewalk. They are going to create and scrawl out what is inside of them whether you are there to cheer them on or not.

But it’s important to understand that someone like that, like me (when I was young), needs exposure. For that I’d have to say my mother was at the forefront, the books in the library and also my father with his love of music. He always played jazz and classical. As a child growing up in the B-Boys, break dancing era, it was nice to know I didn’t have to limit myself or to put myself in a box. So, I listened to and drew, painted whatever I wanted.

You’ve traveled and lived in many countries. How did those experiences influence your work?

I loved seeing how different people from different cultures figured out color combinations and compositions. Also, to have a bit of business on these trips, I sought out children’s bookstores and illustrators. It was nice to see a different kind of aesthetic.

What project are you most passionate about right now?

Right now I’m really excited to see my book on Jackie Robinson hit the shelves. It’s with Harper Collins and focuses on Jackie’s military career. Also, I’m doing another animated film for kids with the company Sweet Blackberry. It will focus on the pilot Bessie Coleman. She got her international pilot’s license in the early 1920s at a time when women just got the right to vote. Her tale is an amazing one and to see it animated is quite exciting.

The project is being funded on Kickstarter as The Bessie Coleman Story by Sweet Blackberry. It has actors Laurence Fishburne and Karyn Parsons attached to it and I’m happy to be named right alongside them for this nonprofit company’s endeavor. Lastly, I am still building my brick and mortar business inside of Decatur, Georgia’s North DeKalb Mall. GAS-ART GIFTS has many classes and art images available but I’m excited to begin my book binding workshop next week for an eager new student.