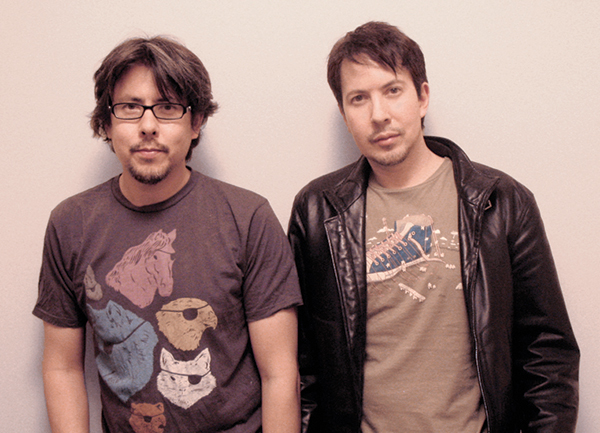 The Fan Brothers, Terry and Eric, are the “it” boys of children’s literature. This sibling author/illustrator duo is responsible for the award-winning The Night Gardener. Their illustrations beg a second and at least a third look before you have seen all the details and the story is just as awe-inspiring. With their debut being such a hit on summer reading lists and the winner of multiple awards, be sure to keep your eyes open for their upcoming projects.

Can you please briefly describe your journey to becoming an author/illustrator for children’s books?

Terry: Both of us had a rather long and circuitous route to becoming children’s books’ authors/illustrators. We both went to art college (OCAD University in Toronto) but after graduating, life threw us a few curve balls and we spent many years outside of the art field. We spent a decade writing screenplays, with our younger brother Devin, trying to get a script optioned in Hollywood. We had an agent there for many years, and wrote three spec scripts before eventually giving up on the dream. It was a bit of a roller coaster ride, with many ups and downs. The closest we came to success was when Dan O’Bannon (the writer of Alien and Total Recall) took an interest in one of our screenplays, and did a rewrite over one summer. Anyway, after reconciling ourselves that screenwriting wasn’t in the cards for us, I ended up working in a hospital as a pharmacist assistant, while still doing art on the side in my free time.

Eric: I ended up working for many years as a delivery driver for a construction rental company, which is probably about as unrelated a job as you can get from illustrating picture books. While attending OCAD, I actually did send out a children’s book proposal that I had written with Devin. He was only 16 years-old at the time, and we were both pretty naive. We sent the manuscript out to a bunch of publishers unsolicited, and most came back unopened, but we did receive two rather nice rejection letters from two publishers. Devin even talked to one of the editors on the phone, and she said we should be “very encouraged” but at the time we felt crestfallen that our “masterpiece” had failed to elicit the response we had hoped for. In retrospect, I wish we had been more proactive and followed up on those contacts and kept working on books. One of the editors had even included detailed story notes, which I still have to this day. Looking back – and this is something that has been confirmed to me over and over again today as a published writer/illustrator – it’s incredible to me how receptive and encouraging people in the industry are. The perception, at least it is to me, is that the publishing industry is kind of a walled dreamland, with armed gatekeepers, with a mandate to crush dreams and repel interlopers. The reality couldn’t be any further from that.

Terry: Anyway, to make a long story short, Eric saw an article one day in the newspaper about a website called Threadless, where you could upload t-shirt designs which were then voted on by the community, and designs were chosen by popularity to be printed as shirts, with a cash prize attached. Eric started submitting designs and eventually got printed.

Eric: It was the first time I had felt any validation for my art, and certainly the first time I’d actually been paid for a piece of art. Terry started submitting designs and we both ended up being printed there multiple times.

Terry: At some point, Threadless partnered with a new print-on-demand website called Society6, and we both started selling our art on that site as well. That was really the turning point for me, since I eventually started earning enough money from my art to quit my job at the pharmacy. It also led to my first job in publishing, since an art director at Simon & Schuster, Lizzy Bromley, saw my work on Society6 and contacted me about working on a book called Rooftoppers, by Katherine Rundell. I did the cover art and chapter decorations. It also led to both of us finding representation, when our agent, Kirsten Hall, saw our work online. Subsequently, this led to us working on The Night Gardener, which was also art directed by Lizzy Bromley and edited by Christian Trimmer. I guess the takeaway is, you never really know how one little decision will ultimately impact the trajectory of your life.

Terry: My greatest challenge, and I think I speak for both of us, was not giving up on my dreams, and persisting against considerable odds. When I quit my full-time job it was a significant gamble, and most people at the time told me I was crazy, but I couldn’t reconcile myself to doing something I wasn’t passionate about for the rest of my life. I basically made the leap of faith without a parachute, and for a time, I was without a fixed address or reliable income. I even slept on Eric’s couch for almost a year, but eventually the tide turned and I found myself surviving, and then thriving, as a working artist.

Eric: I was a bit more cautious than Terry, but he definitely blazed the path, and showed me that it was possible to work as an artist and be successful. My biggest success has to be getting The Night Gardener published, since it was not only the fulfillment of a lifelong dream, but also the catalyst for quitting my full-time job. I think I gave my two-week notice at work a week after I found out our book was being published.

What role did books play in your life growing up?

Eric: Books played a pretty significant part of our lives, especially when we were kids. Where the Wild Things Are was always our favorite picture book and I think it definitely opened a door in our imagination. It also showed us how powerful and transformative a book could be. When we were very little we even made our own picture book about dinosaurs called Many Years Ago. It’s still sitting on Terry’s bookshelf and I still get a kick out of looking at it, since it represents the closing of large circle, being our first official book collaboration.

Terry: We just back from attending the Sendak Fellowship last week, which was a huge honor for us, and incredibly inspiring. There is also a circular feeling to that, since he was our favorite artist for so many years. Seeing the desk where he wrote Where the Wild Things Are, feeling his presence on the farm, and listening to stories about him from people who knew him well – Lynn Caponera, Dona Ann McAdams, Arthur Yorinks – was indescribably amazing.

What/who has inspired you in your life?

Eric: Well, aside from Sendak, who we’ve already mentioned, we were also inspired a lot by our parents. Our dad is a philosophy professor but is also very creative. When we were younger, there was a pottery wheel and kiln in the basement and my dad produced beautiful pottery. He was also a wonderful storyteller and would tell us stories about a world of elves that he created on the spot every night. I remember there were different colored elves – purple, green, red – who were often in conflict, and he left it up to us to try to manage those conflicts and direct the narrative. To us they were mostly just exciting adventures, but the subtext of the stories was always about tolerance and empathy and conflict resolution. In the process, he also taught us a lot about storytelling, since his stories were full of cliffhangers and surprising twists.

Terry: Our dad is originally from Taiwan, so I think moving to Canada was a bit of a shock with all the snow and long winters. To compensate, he filled our house with plants and bonsai, so our living room was something of a jungle. There was even a basement aviary full of parrots that he bred, and some of them would fly free in the house. I have an image of him clipping away at various bonsai, and that would later inform our characterization of the Night Gardener. Our mom was a professional harpist, and so in addition to plants and parrots, our house was always full of music. My dad had rescued a hummingbird that flew into our window and damaged its beak, and when my mom would practice her harp in the sun room, Woodstock would perch on her music stand as if listening, and if she wore a flowered dress, Woodstock would try to drink from the flowered pattern.

Are you a book buyer or a library user?

Eric: We have a beautiful library a few blocks from us and I keep telling myself I should get a library card, but for some reason I buy books instead. I love to read but I can never seem to do it on a fixed schedule, so I have an ongoing concern that if I took books out from the library, I’d be perpetually late returning them.

Terry: I’m the same, although I do enjoy spending time in libraries; they’re one of my favorite places. We’re extremely fortunate that Toronto has one of the best collections of children’s books at the Lillian H. Smith branch – the Osborn Collection of Early Children’s Books. We’ve spent quite a few afternoons there with fellow illustrators in Toronto perusing the vast collection of books, under the guidance and tutelage of Martha Scott, who is the curator there. She is an absolute fount of knowledge and we can’t thank her enough for sharing that with us, and to fellow illustrator Sydney Smith for introducing us to the collection and organizing the visits.

Can you describe your writing/drawing process and how that works in a collaboration?  Are there ever any sibling squabbles?

Eric: Our process is fairly organic. Our story process usually begins with a lot of discussion and brainstorming, and then with both of us refining and writing drafts until we arrive at something we’re happy with, often in conjunction with our editor and art director. The drawing process is similar. When we have a rough, we’ll both start contributing elements and building the final scene, often passing the same scene back and forth – sometimes the physical art, sometimes the digital file.

Terry: We tend to work both traditionally and digitally – scanning our art and then coloring and compositing the art in Photoshop. It gives us the necessary flexibility to work collaboratively and make changes as we go along. We sometimes have disagreements, which never seem to descend into outright squabbles. I think we both realize that the process is give-and-take, and that we both have the same end goal in mind, which is making the art as good as we can.

What’s coming up from the Fan Brothers?  Together and separately?

Eric: Together, we have a book coming out in the fall that we illustrated – The Antlered Ship, written by Dashka Slater. It’s being published in September by Beach Lane books, which is an imprint of Simon & Schuster. We’re also illustrating another picture book called Scarecrow, written by Beth Ferry, which is being published by HarperCollins in 2018.

Terry: We’re also working on our next book that we both wrote, called Ocean Meets Sky. It’s being published by Simon & Schuster for a summer 2018 release.