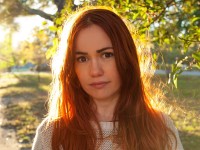 Rookie children’s book author Lucy Ruth Cummins is in no way new to the game.  Cummins has been an art director at Simon and Schuster for the past 13 years, an amazing feat seeing as she is just a young 33 years old.  Along the way she has worked with some incredible authors and illustrators and has even illustrated the book, The Taking Tree: A Selfish Parody by Shrill Travesty.  Being an art director though, it was always Cummins’s first instinct to think of others when a good idea for a book came to her.  But when her idea for what would become her debut, A Hungry Lion or a Dwindling Assortment of Animals, set for release on March 15, Cummin’s decided to keep it for herself, and the children’s book community is glad she did.   I was lucky enough to chat on the phone with Lucy and ask a few questions to get to know her better.

What were your favorite books as a child?

Buying new books at bookstores was never a thing we did when I was younger. I don’t know that I realized new books were available for purchase! The books we had were books that my mother had kept from the 60s and 70s or had purchased from used book sales at the library or from thrift stores or garage sales.  I remember connecting with the Frances series by Russell Hoban.  Despite her being a badger, I was able to identify with Frances—she seemed to have the same true-to-life feelings that I had, even the uglier ones like selfishness, plus a she had a sister like I did.  I also remember having the Madeline books and Berenstain Bears around and one of my favorite books still to this day is The Story of Ferdinand. The Flat Stanley series was another favorite that I couldn’t get enough of.

Are you a book buyer or library user?

As a child growing up less than a block away from the library I remember frequent visits there with my sister but now as an adult I’m more of a book buyer than a borrower.  I love building my collection and being able to admire the illustrations and stories, and I see the value of having that art on my shelf.  It’s neat, though—now that I’m back at work, my son shares a babysitter with little girl, and they visit the library frequently for story times. I love knowing that he’s making a positive association with books and reading even when I can’t be there to share those things with him.  I can definitely see the library becoming a bigger part of our lives together as he gets older, especially when he’s past the stage where his favorite way to experience a book is to put it in his mouth.

What came first, the pictures or the story?

As an art director a very important part of my job is  determining the best way to use pagination to convey the story with suspense and interest, to grab the reader and build excitement.  So one day I was just thinking abstractly about of how page turns function in storytelling, setting the stage and advancing the chronology, and the idea of a decreasing amount of animals with each page turn popped into my head. I started with the thumbnail drawings, then colored sketches blocking out the story visually, and  then took a few cracks at writing the story directly to that sequence of images and just ended up picking what I thought was the funniest way of telling it.

As the mother of an infant where did you find the time to write?

The lead time for a picture book is about 18 months so the majority of the work on “A Hungry Lion” was completed before my son Nate was born and even before I was pregnant.  The idea came to me and I knew if I wanted to pursue it I would need a break from work to meditate on it a bit, so I took some vacation days and left the city and visited my family in Central New York. It seemed like a good way to kill two birds with one stone—to get to see my folks and also just draw and think in totally different, but completely comfortable, environment. I slept in my childhood bedroom, and created the dummy in the overnight hours, sharing my progress with my mom and dad over our breakfasts. I finished the book dummy in one week in July, acquired an agent to represent the project in August, shopped the proposal to publishers in September, and ultimately the book found its home at my publisher, Simon & Schuster Books for Young Readers, in October of that year. I made revisions before it was acquired, and I  completed the final interior illustrations in November 2014, right around the same time I found out I was pregnant.  Now with a new baby at home, my writing time is pretty much limited to my train rides to and from work!

You’ve already received starred reviews from Kirkus and Publisher’s Weekly.  How do you feel having received such great pre-publication reviews?

I have always been a very harsh critic of my own work, so it took me a bit to realize I had something good in this story. There were little bits of  validation that I was on the right track with it at every stage, beginning with my family and friends, then placing it with an agent, and eventually in selling the idea to the publisher.  So there were all these little incremental reassurances that it “worked” along the way, but that only gets you so far. So getting that positive feedback from review sources is such a thrill and a relief.  The book had been completed for about a year before reviews starting coming in November and so it was like I had been holding my breath for 12 months.  I’m still waiting for the readers’ reactions though, both young and old—that’s will be the real verdict for me on what I’ve done.  A successful picture book should work for readers of all ages, just like how animated films today attempt to capture a broad audience with their storytelling, so I hope my book is fun for both adults and the children they share it with. All the critical praise I’ve received has been so wonderful, but that’ll be the real test: to know that readers enjoy it, too.

What’s next?  Do you plan on continuing your path as an author/illustrator?

It’s been hard to find something that I find worth pursuing after completing A Hungry Lion, in that it’s something I am extremely proud of and that I  feel truly “works”. But yes, I have some ideas that I work on when I can find time between work, diaper changes, and feedings. Hopefully there will one day be a second book, maybe after we master potty training.

Lucy Ruth Cummins works as an Art Director at Simon and Schuster and lives in Brooklyn with her husband and young son.  A Hungry Lion or a Dwindling Assortment of Animals will be her first book as both author and illustrator.