Jon Klassen   Jon Klassen is the creator of the #1 New York Times bestseller I Want My Hat Back, which was named a Theodor Seuss Geisel Honor Book, a New York Times Book Review Best Illustrated Children’s Book of the Year, and a Publishers Weekly Best Children’s Book of the Year. He is the illustrator of House Held Up by Trees, a picture book written by Pulitzer Prize-winning poet Ted Kooser, as well as Cats’ Night Out by Caroline Stutson, which won the Governor General’s Award; Extra Yarn by Mac Barnett; and “The Incorrigible Children of Ashton Place” series by Maryrose Wood.   Jon Klassen has worked as an illustrator for feature animated films, music videos, and editorial pieces. His animation projects include design work for DreamWorks Feature Animation as well as LAIKA Studios on their feature film Coraline. Other work includes designs for a BBC spot used in the coverage of the 2010 Olympics in Vancouver, which won a 2010 BAFTA award. Originally from Niagara Falls, Ontario, Jon Klassen now lives in Los Angeles.A Conversation Between Jon Klassen and His Editor, Liz Bicknell

Liz: It’s a bit dizzying to remember that only seven months ago we were waiting for I Want My Hat Back to be published, and now the book is a number-one New York Times bestseller! How does a person even take that in? How do you feel when you wake up in the mornings?Jon: It’s crazy! There’s a line in a one poem about treating both success and failure as impostors, or something. I have been trying to keep myself in check about doing that, because it comes in handy when things don’t go as well, but I will say that this impostor is a pretty nice one to have around.Liz: Working with you is a little bit like hearing a good joke or watching a great movie; I have this instinctive faith in your work and know I need to keep quiet until you feel done. It’s only when we get working on a book that I start pulling everything apart and mentally repacking it. It seems to me that you work very instinctively yourself. Do you think so?Jon: These are very nice questions. I have learned that I am really bad at reading people and trying to calculate what might be wanted of me and working to that. It always looks forced and awkward. So the only other option is to try to not think about that and do what you like and see how it adds up outside when it’s done. At the very least you end up with something you yourself kind of like, and if it tanks, you can go down with a ship that you recognize.Liz: I love those moments when we discover something we have in common – like our enjoyment of spot-the-difference puzzles – but one thing I do not share with you, I admit, is a fascination with headgear. What is it with you and hats?Jon: I like them! They organize things for me, I guess. And they are superfluous, most of the time, so they work nicely for stories like these where the characters make such a big deal out of having one. There’s no real practical reason to have a hat, so then it just becomes about the character loving it. It’s the only reason he wants it. So then it’s kind of a love story, and so you know how you want it to end.Liz: OK, so, since I Want My Hat Back is the first book that you both wrote and illustrated, how did you feel about being (oh-so-gently) edited? Was it what you expected?Jon: It was much gentler than I expected. I was very nervous to write something. Writing is so hard. I thought there was a chance the text would be torn apart, and I was grateful that you got the tone of it right away and took it into account in the (gentle) editing. It’s the hardest thing to try to explain tonal things, and I was so relieved that we never needed that. We skipped right over into a really nice spot where we could discuss things inside it.Liz: We haven’t really talked about your second book yet, but I think it would be fair to say that . . . it does feature a hat thief, doesn’t it?Jon: Yes. But a different thief, and a different hat.For more information visit: www.burstofbeaden.com.Contributor: Candlewick Press  Reviews 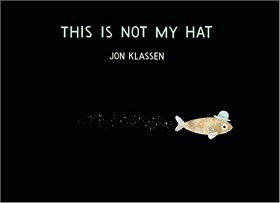 This Is Not My HatJon Klassen   A little fish tells how he took a hat that belonged to a large fish that happened to be sleeping. The smaller fish thinks that the big fish will not notice that the hat is missing and that the little fish is responsible for taking the hat. However, the illustrations of the characters indicate just the opposite. The position of the large fish’s eyes seems to show that he notices his hat is gone. Next, the little fish even attempts to justify his hat stealing by commenting how the hat suitably fits him. The large fish follows the little fish to recover the hat. The pictures and text infer that the larger fish chases the smaller one into a growth of underwater plants. Using the pictures, readers will need to make their own deductions as to how the problem of the hat is resolved. This story has a dark humor type of ending. Klassen also wrote and illustrated I Want My Hat Back in which a bear is seeking to find his missing hat. 2012, Candlewick Press, Ages 3 to 7, $15.99. Reviewer: Carrie Hane Hung (Children’s Literature).
ISBN: 9780763655990 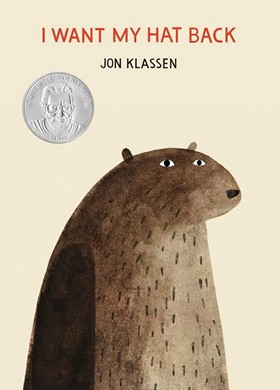 I Want My Hat BackJon Klassen   My hat is gone. I want it back.” A bear’s quest for his missing hat has him asking one animal after another. “Have you seen my hat?” The fox hasn’t seen it. The frog hasn’t seen it. Turtle, snake, possum-no one has seen his hat. And then, there’s the rabbit. “I haven’t seen it. I haven’t seen any hats anywhere. I would not steal a hat. Don’t ask me any more questions.” It’s obvious to readers and listeners, even if it isn’t to the bear, that the rabbit is wearing his hat. But the realization hits bear a few pages later, and he races back to find the rabbit. An accusation on one page spread is followed by a wordless face-off on the next. One more turn of the page reveals the bear happily wearing his hat. Enter a squirrel: “Excuse me. Have you seen a rabbit wearing a hat?” The bear’s response suggests the rabbit did not fare well in this comical picture book perfect for teaching inference. Jon Klassen’s muted palette and elegantly simple, distinctive illustrations are a perfect match for his offbeat story. 2011, Candlewick Press, Ages 4 to 9, $15.99. Reviewer: CCBC (Cooperative Children’s Book Center Choices, 2012).
ISBN: 9780763655983 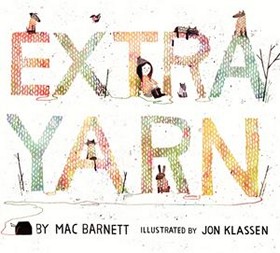 Extra YarnMac BarnettIllustrated by Jon Klassen   When happenstance delivers Annabelle a “box filled with yarn of every color,” she fashions herself a nice sweater. When there’s yarn left over, she then creates a garment for her dog, Mars; as she continues to find ways to use the wonderful yarn (“She made sweaters for all the dogs, and all the cats, and for other animals, too”), she’s always left with extra yarn for new projects. But what will happen when a wealthy visiting archduke covets Annabelle’s magical yarn? The ending is a little low-impact (Annabelle gets her box back from the thieving archduke and continues to knit), but there’s plenty of appeal in the quietly matter-of-fact yet humorous tone (“So Annabelle made sweaters for things that didn’t even wear sweaters”) and in the folkloric premise, which is reminiscent of stories ranging from the Hanukkah miracle to Gilman’s Something from Nothing (BCCB 2/94). Klassen’s art, however, really steals the show. The sharply edged figures with slyly comic, slightly skewed geometry recall his work in I Want My Hat Back (BCCB 9/11); the bleak wintry landscape is virtually monochromatic, with almost everything-kids, houses, pets-shades of a murky brown against the snow, save for Annabelle’s varicolored creations (and a touch of pink in chilled cheeks and noses). The knitted elements are cleverly printed in a stockinette-style pattern, their colors subtly varying as the yarn unspools. Slide this into a winter or folklore unit, or just use it to introduce the craft of knitting and let kids hope for magic. 2012, Balzer + Bray/HarperCollins, Ages 5 to 8, $16.99. Reviewer: Deborah Stevenson (The Bulletin of the Center for Children’s Books, January 2011 (Vol. 65, No. 5)).
ISBN: 9780061953385 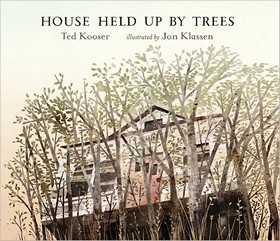 House Held Up By TreesTed KooserIllustrated by Jon Klassen   House Held Up By Trees is a poignant, true story about a deserted house that gradually became surrounded and uplifted by young trees, over the years after it was no longer lived in. Haunting, spare paintings show the house first as it was built, with the father clearing out all the little trees from the yard, and then later as it gradually changed after the father and his children have grown up and left. The presence of the surrounding trees is a mystical theme in House Held Up By Trees. The children, when they are young, are attracted to the shadowy depths and mystery of the surrounding trees. But their father just kept working on his lawn and digging up all the little tree sprouts that planted themselves. Finally the father grows to old to work so hard on the lawn. He puts the house up for sale and moves to the city to an apartment, where he will be closer to his son and daughter, and possibly less lonely. But the house is never sold. Instead the little trees come to surround it and grow up around it. What might have been a sad tale becomes a kind of celebration of nature and the patient, persistence of the gentle trees. House Held Up By Trees is a story for children age 5 and up, and for the adults who will read it to them. 2012, Candlewick Press, Ages 5 up, $16.99. Reviewer: Midwest Book Review (Children’s Bookwatch, July 2012).
ISBN: 9780763651077 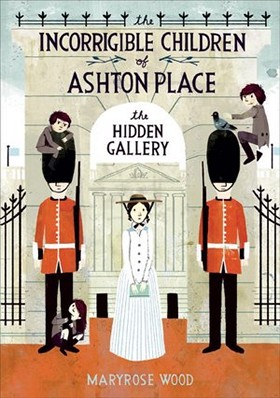 The Hidden GalleryMaryrose WoodIllustrated by Jon Klassen   The wolf children are back; though thanks to their governess Penelope Lumley a bit more like civilized children. While repairs are being made to Ashton Place, Lady Ashton decides to spend the time in London, and Miss Lumley is thrilled about the opportunity to expose the children to the civilizing influences of the city. Miss Lumley’s former headmistress sends Penelope a copy of a rather enigmatic guide that leads Miss Lumley and the children to a mysteriously hidden gallery at the British Museum where more clues to the children’s identities are revealed, as well as clues to Miss Lumley’s own status. This second installment is slower to get moving than the first as the children don’t inject their delightful chaos until quite late. Still, this one is a must for those who were thoroughly entertained by the antics of these incorrigible kids and their intrepid governess in The Mysterious Howling (Balzer + Bray/HarperCollins), 2010). Klassen’s b&w drawings should be an asset to this title as they were in the first. Recommended. 2011, Balzer + Bray/HarperCollins, Ages 8 to 12, $15.99. Reviewer: Richard Parker (Library Media Connection, August/September 2011).
ISBN: 9780061791123Updated 10/1/12To stay up to date on new books by this author, consider subscribing to The Children’s Literature Comprehensive Database. For your free trial, click here.If you’re interested in reviewing children’s and young adult books, then send a resume and writing sample to marilyn@childrenslit.com.Back to Top