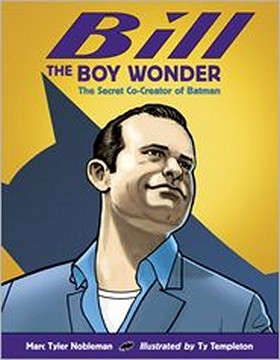 Bill the Boy Wonder: The Secret Co-creator of BatmanMarc Tyler NoblemanIllustrated by Ty Templeton   Every Batman story is marked with the words ‘Batman created by Bob Kane.’ But that isn’t the whole truth. A struggling writer named Bill Finger was involved from the beginning. Bill helped invent Batman, from concept to costume to character. He dreamed up Batman’s haunting origins and his colorful nemeses. He named Gotham. Despite his brilliance, Bill worked in obscurity, his name never appearing on a Batman comic. It was only after his death that fans went to bat for Bill, calling for DC to acknowledge him as co-creator of Batman. Their fight for justice continues to this day. Provided by the publisher. 2012, Charlesbridge, Ages 8 up, $17.95.
ISBN: 9781580892896 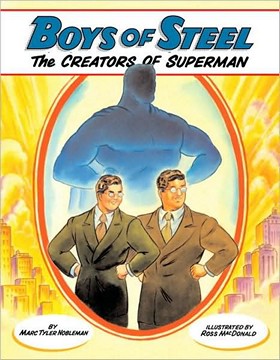 Boys of Steel: The Creators of SupermanMarc Tyler NoblemanIllustrated by Ross MacDonald   This is the story of two “boys of steel,” Jerry Siegel and Joe Shuster, creators of the Superman comic strip. Both Joe and Jerry grew up during the Great Depression, during which they endured hardships and difficult living conditions. Both were somewhat outcasts at school, having limited friendships and little interest in sports or other school functions. However, they both had magnificent imaginations and shared a passion for writing and drawing. The two boys became strong friends in high school and developed into a perfect team. They produced several comics, which were rejected. Then, they struck on the idea of Superman. Although it was rejected four times before it was accepted, Superman became an instant hit. In the years since, the character and his story have been transformed into many forms of enjoyable media. Nobleman’s account is an engaging and informative read. The illustrations are well-designed to evoke the historical, 1930s setting. The story is inspiring in its messages about teamwork and perseverance. The final three pages develop the story of Joe and Jerry further, highlighting the injustices and morality of the publishing business. 2008, Alfred A. Knolf/Random House, Ages 7 to 9, $16.99. Reviewer: Charles E. Kreinbucher (Children’s Literature).
ISBN: 9780375838026 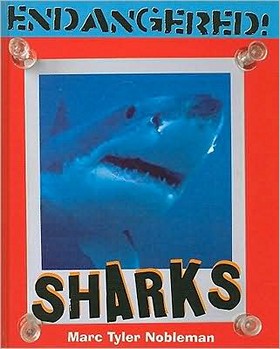 SharksMarc Tyler Nobleman   While many view sharks are vicious killers, in fact only four subspecies are responsible for most unprovoked attacks on humans, and all four have decreasing populations and might soon disappear. More than 200 subspecies are threatened or endangered, with seventy-five on the verge of extinction. During the twentieth century, technology (sonar, long fishing lines, mechanical reels, and nets) has allowed man to kill or capture more and more sharks and other fish, with the subsequent result that many are being killed faster than they can reproduce. This entry in the Marshall Cavendish “Endangered!” series provides information on shark habitats, their life cycle, diet, and bodies, as well as clearly stating the issues leading to their lessening numbers–over-fishing of other fish, which lessens their food supply, catching them for food and other body parts, hunting for sport, and accidentally catching them in fishing gear. Growing awareness of over 200 shark species listed as at least vulnerable has led to conservation efforts by private organizations as well as governments. A glossary, sharp, close-up photographs, and an occasional sidebar help readers glean more information. Age-appropriate books and websites will be useful for those wanting to know more. Current and informative, this will appeal both to browsers and those doing research. 2008, Marshall Cavendish Benchmark, Ages 8 to 10, $20.95. Reviewer: Peg Glisson (Children’s Literature).
ISBN: 9780761429883 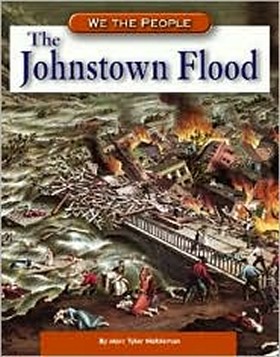 The Johnstown FloodMarc Tyler Nobleman   This is a historical account of one of the deadliest disasters in United States history. Songs, poems, and films have been written about the flood, caused by a break in the dam on the Little Conemaugh River in Pennsylvania. The dam was built in order to create a continuous flow of water in the canal between Johnstown and Pittsburgh. But the fourteen-year project was obsolete by the time it was finished. Railroads were the main means of transporting goods by 1873. The dam became weak from neglect; and in 1889, a major storm flooded Lake Conemaugh. On May 31, 1889, Colonel Elias Unger began sending telegrams and messengers on horseback to warn the neighboring townspeople of an impending flood. Many people ignored this warning, since many previous warnings had been false alarms. But the lake exploded through the dam and water reached speeds of up to 40 miles per hour. Photographs and illustrations show the devastation that resulted in the deaths of over two thousand people. This is one of the first disasters whose victims were aided by the new American Red Cross. The new library in Johnstown, Pennsylvania, was one of the first projects of the philanthropist Andrew Carnegie. This is one of several books in the “We the People series.” Others include Roosevelt’s Rough Riders, The Hindenburg, and The Great Chicago Fire. 2006, Compass Point Books, Ages 9 to 12, $23.93. Reviewer: Debbie West (Children’s Literature).
ISBN: 9780756512675Updated 9/1/12To stay up to date on new books by this author, consider subscribing to The Children’s Literature Comprehensive Database. For your free trial, click here.If you’re interested in reviewing children’s and young adult books, then send a resume and writing sample to marilyn@childrenslit.com.Back to Top