Where would we be without Simple Machines? Simply stated, we would be right about where we started. In Explore Simple Machines! 25 Great Projects, Activities, Experiments kids will learn that the building blocks of all machines are not only simple, but powerful. From zippers to the pyramids, rolling pins to catapults, we are surrounded by simple machines. This book will amaze kids with the ingenuity they already possess and inspire them to look differently at the objects they use in everyday life.

Explore Simple Machines! 25 Great Projects, Activities, Experiments dedicates a chapter to each of the six simple machines that were identified by physicists hundreds of years ago and are at the core of our daily activities: Levers, Inclined Planes, Pulleys, Screws, Wedges and Wheels and Axles. Kids will develop analytical skills as they figure out where force is applied and what kind of work it generates. Biographical information on some of the personalities behind the theories and developments of simple machines gives kids perspective on the challenges people have faced and overcome over the past few centuries.

Anita Yasuda is a qualified Montessori and ECE teacher. She is the author of more than 20 books for children and adults. She has lived and worked in other countries. She is a member of the Society of Children’s Book Writers & Illustrators (SCBWI) and the Canadian Society of Children’s Authors, Illustrators and Performers (CANSCAIP). She completed her Honors degree at the University of Toronto. Her work has been featured in Homeschooler’s Guide, New Jersey Parent, Edmonton’s Child, Kahani-A South Asian Literary Magazine, Highlights for Children, and many other publications. 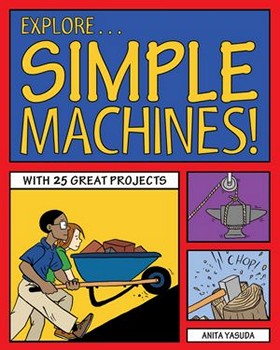 Explore Simple Machines!: 25 Great Projects, Activities, ExperimentsAnita Yasuda   Simple machines are all around us and have been used by people since ancient times. This book will inspire kids to look differently at the objects they use every day. How do they work and why do they do what they do? Each chapter is dedicated to one of six simple machines that were identified centuries ago; levers, inclined planes, pulleys, screws, wedges, and wheels and axles. For example, after learning the definition of a wedge readers will then be introduced to the many items they have access to everyday that are classified as a wedge. Knives, axes, doorstops, and nails are all considered wedges because they each have one or two sloping sides ending in a sharp point. Wedges are used to lift or split an object and may also be used to move an object or stop it from moving. No one knows exactly who invented the wedge, but they can be traced back to the Paleolithic era of the Stone Age. Each chapter ends with experiments and projects relating to that particular simple machine allowing kids a hands-on experience that is simple, but educational and fun. This book is well-organized, with easy to understand directions and straightforward text. Also included are a glossary, index and list of references for additional information. This book is part of the “Explore Your World” series. 2011, Nomad Press, Ages 6 to 9, $12.95. Reviewer: Heather Kinard (Children’s Literature).
ISBN: 9781936313822 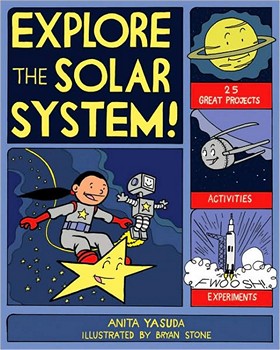 Explore the Solar System!Anita YasudaIllustrated by Bryan Stone   Basic information about our solar system is easily absorbed through the text, inset boxes that highlight words to know, and a variety of activities. There are even a few jokes scattered here and there. Readers learn that although the Greeks believed in an Earth-centric system, today we know that the Sun, not the Earth, is the center of our solar system. The book presents a clever way to remember the planets. A game called “The Galaxy Scavenger Hunt” provides a chance to learn more about our solar system. The game can be expanded to include astronomers, astronauts and anything space related. Another interesting project is the creation of an origami solar system mobile. After reading this book kids will have obtained lots of facts, trivia to amuse family and friends, and projects for rainy or lazy summer days. An added bonus is an opportunity to increase vocabularies because in addition to the words called out in the text there is a glossary at the end of the book. For those who love computer resources there are websites and for others there is a list of science museums and planetariums. The index identifies all the activities as well as other topics addressed in the book. It is a title that could be used by teachers in the elementary grades, scout leaders and homeschoolers. 2009, Nomad Press, Ages 6 to 9, $12.95. Reviewer: Marilyn Courtot (Children’s Literature).
ISBN: 9781934670361 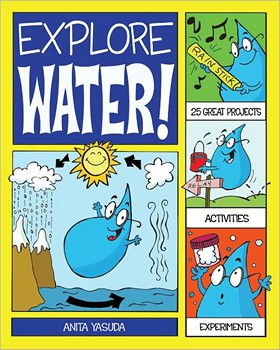 Explore Water!Anita YasudaIllustrated by Brian Stone   Part of the “Explore Your World” series, Yasuda takes young readers on a wild water ride. “Can you guess who I am?” she writes in the introduction. “I have been here since Earth began. I splash and spill. I drip and drop. You use me, play in me, and drink me…Can you guess who I am? Water!” This energetic book looks at where we find water, the water cycle, water and weather, water works–including waterpower–water pollution and conservation, and water in art. The writing is clear and enticing. The 25 projects have a variety of levels of difficulty. For example, the waterfall sculpture could be made by any age child, while young children building the hair hygrometer might need adult help with the logistics. The illustrations are fun. Since water is so central to the book, the illustrator chose to make a droplet into a cartoon character, with glasses and a quirky smile. Another admirable part is Yasuda’s many short sidebars including one called “Meet a Scientist.” She highlights at least five different scientists who are connected with water. Many students will enjoy this book as they learn water basics. Backmatter includes glossary, list of resources and index. 2011, Nomad Press, Ages 6 to 9, $12.95. Reviewer: Amy S. Hansen (Children’s Literature).
ISBN: 9781936313426 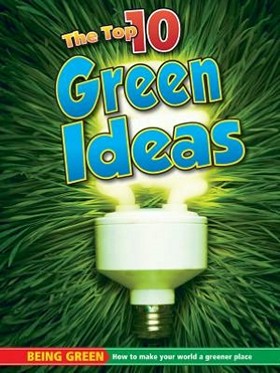 Green IdeasAnita Yasuda   Green–magic color symbol for a purer planet–pervades both design and content of the “Being Green” series intended to entice middle readers into thinking green. After a brief introduction, this slim volume presents, in ten two-page spreads, intriguing color photographs and ten unusual green ideas for solutions to environmental problems. Some of these involve advanced technology or the efforts of governments and industries. Recycling robots, for example, sound like fun (some are already in use in Japan), though readers will have to wait to see the robots at work in the U.S. Using human energy is being tested in several countries–stepping on power-generating mats or pushing a special revolving door can convert human motion into electricity. One European designer envisions flying bike lanes above a town; Masdar in Abu Dhabi will be a carbon-free city (no cars allowed) for 50,000 people. These are novel ways to reduce carbon footprints, but what can kids do now? Yasuda suggests helping create a farmers’ market in a community, practicing “precycling” (planning ahead for less waste), or celebrating and advertising Earth Day. Additional pages include a map of top green cities in the world (San Francisco is one), a spotlight on careers as an environmental engineer or scientist, and a quiz on the text. Billed as “media enhanced,” each volume has a code for the Internet, where kids can find related video clips, slide shows, web links, and activities. Text is easy to read, but contains unfamiliar words and concepts; the best enhancer is a creative teacher who can help students explore answers to the many questions raised in this series. 2011, AV2/Weigl, Ages 9 to 12, $28.55. Reviewer: Barbara L. Talcroft (Children’s Literature).
ISBN: 9781616900946Updated 8/1/12To stay up to date on new books by this author, consider subscribing to The Children’s Literature Comprehensive Database. For your free trial, click here.If you’re interested in reviewing children’s and young adult books, then send a resume and writing sample to marilyn@childrenslit.com.Back to Top