Donnie Lemke   Donnie Lemke works as a children’s book editor and writer in Minneapolis, Minnesota. He is the author of the “Zinc Alloy” graphic novel adventure series. He also wrote Captured Off Guard, a World War II story, and a graphic novelization of Gulliver’s Travels, both of which were selected by the Junior Library Guild. Most recently, Lemke has written several Batman adventures for DC Super Heroes chapter books.Have you, or do you now, participate in any action sports? How have they influenced you?

As a teenager, I skateboarded a little and probably got good enough to pop a decent ollie. But growing up on dirt road in rural Minnesota didn’t give me a whole lot of opportunity to practice outdoors. Instead, I spent A LOT of time honing my skills with a controller-playing SKATE OR DIE! (talk about old-school) on Nintendo or TONY HAWK’S PRO SKATER for Playstation.When did you decide to become a writer?

While playing video games! Well, maybe not exactly, but video games and movies have definitely influenced my writing style. I enjoy both reading and writing books that are fast-paced, extremely visual, and have a series of concrete goals or missions. The Tony Hawk 900 Revolution series has all three of the these things.Describe your approach to the Tony Hawk’s 900 Revolution series. Did personal experiences influence the stories?

When coming up with the idea for Tony Hawk’s 900 Revolution, I was definitely influenced by books I’ve read, video games I’ve played, and movies I’ve watched. Specifically, manga series, such as DRAGON BALL and SCOTT PILGRIM, heavily influenced the quest aspect of the TH900 series. In DRAGON BALL, a child named Son Goku searches for seven mystical objects. In SCOTT PILGRIM, the main character must destroy his girlfriend’s seven evil exes. Like video games, both these books have strong objectives, which keep the reader engrossed until the very end. I’m hoping the TH900 series is just as addictive.Any future plans for the Tony Hawk’s 900 Revolution series?

Yes! There are 24 books planned for the series, and I’m hoping to write many more!What other projects have you worked on? Anything we should watch out for? 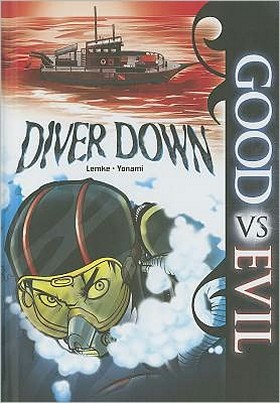 Diver DownDonald LemkeIllustrated by Yonami   Each of the books in this series can be read left to right, top to bottom. The stories can also be read as two separate stories: divided between the top half of the page and the bottom half of the page. The characters must face evil brothers, long dead creatures, shopkeepers and a threatening country. Visually appealing graphics add to the compelling storylines. Each book includes information about the process of developing graphic novels and each includes visual questions to allow the readers to understand and define how they “read” a graphic novel. Recommended 2012, Stone Arch Books, Ages 11 to 15, $22. Reviewer: Terry Day (Library Media Connection, March/April 2012).
ISBN: 9781434220929 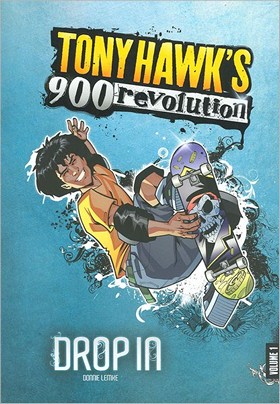 Drop InDonald LemkeIllustrated by Caio Majado   In Tony Hawk’s 900 Revolution series, Omar is a beach boy skateboarder from sunny California; Dylan prefers the challenges of city skating in NYC. Amy shreds the mountains of Colorado on her snowboard; Joey rides BMX in the Utah desert. Though these four teenagers are from different locations and walks of life, all four have something in common: They conduct the energy of a magical skateboard. The legend goes that when skateboarder Tony Hawk landed the first ever 900, his dedication and skill imbued his skateboard with a magical energy that caused it to explode into energized bits. When in possession of a fragment, a chosen few can actually channel the energy to take their talents to extreme new levels. Together, the chosen make up a covert group called The Revolution that work to protect the power and keep it away from those who might use the magic to destroy the world. n each of the first volumes of the series, we meet one of the chosen–first Omar in Volume 1, then Dylan in Volume 2, and Amy and Joey in Volumes 3 and 4–along with those who identify and organize the chosen. Each young teen’s story is a bit different, with different but equally rich sport and location imagery. The series is clearly directed at an audience who loves fast-paced action stories and extreme sports, but the descriptions are such that non-enthusiasts will not be confused or bored. A quick and action-packed read, this prose and graphic novel hybrid series is a sure thing for reluctant readers. (Tony Hawk’s 900 Revolution) 2011, Capstone Press, Ages 12 to 18, $25.32 and $6.95. Reviewer: Jennifer M. Miskec (VOYA, December 2011 (Vol. 34, No. 5)).
ISBN: 9781434234513 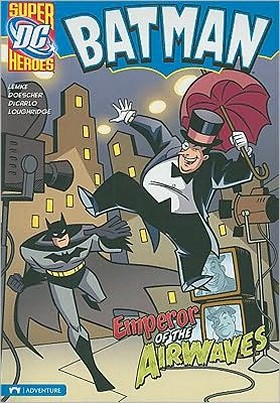 Emperor of the AirwavesDonald LemkeIllustrated by Erik Doescher, Mike DeCarlo, and Lee Loughridge   These high-interest, low-level books will entice struggling readers, reluctant readers, and accomplished readers alike. The Man of Steel and Batman are back with exciting, colorful full-page illustrations in chapter book style. Last Son of Krypton sets the background for Superman’s epic adventures, with a plot true to the original Superman storyline. The Museum Monsters introduces readers to the adult reporter Clark Kent and his coworkers, Lois Lane and Jimmy Olsen. Batman continues his quest to rid Gotham City of crime. Emperor of the Airwaves involves a clever scheme by the Penguin, and The Revenge of Clayface features Clayface and the Joker. “From the Desk of Clark Kent” highlights the end of each Superman book, and a confidential police file on the main criminal appears in the Batman titles. Added features include discussion questions and writing prompts. This set will be a must-have as it clearly features the “wow” factor of brightly colored illustrations to go along with exciting plots and well-known characters. Highly Recommended. 2009, Stone Arch Books, Ages 8 to 12, $25.32. Reviewer: Nick Petrosino (Library Media Connection, October 2009).
ISBN: 9781434213648 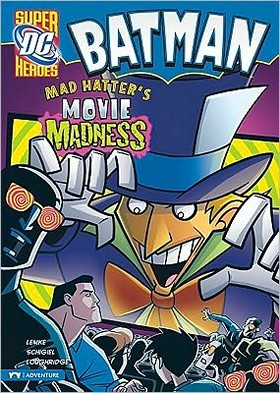 Mad Hatter’s Movie MadnessDonald LemkeIllustrated by Gregg Schigiel and Lee Loughridge   It is down the rabbit hole for Batman as he searches for the reason that masked teenagers are stealing jewels all over Gotham City. His sidekick, Tim Drake (a.k.a. Robin), is involved in the heists, but leaves Batman a clue so that he can figure out the Mad Hatter’s brain washing technique. The story begins at the showing of a new Alice in Wonderland movie where Bruce Wayne (Batman) and Tim are confronted by a peculiar usher. Bruce is the only one in the audience unable get the 3-D glasses to view the movie and therefore escapes the control of the Mad Hatter. The comic book style of illustration and the sound words that are highlighted throughout the story are quite appealing. The additional information at the end of the book includes a profile of the villain, glossary, discussion questions and writing prompts. This would be a good choice for older elementary, low level readers. 2011, Stone Arch Books/Capstone Books, Ages 8 to 12, $18.99. Reviewer: Susan Thomas (Children’s Literature).
ISBN: 9781434216755 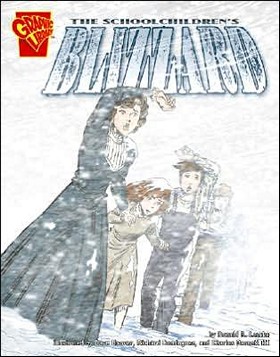 The Schoolchildren’s BlizzardDonald LemkeIllustrated by Dave Hoover, Richard Dominguez, and Charles Barnett III   On the morning of January 12, 1888 in the Dakota Territory, the Knieriem family shuffled their children off to school in the mild winter weather. By 11:42 that morning the weather quickly changed, blanketing the American Prairie with blizzard conditions. Because weather forecasters were unable to warn the pioneer families early enough, children, adults, and livestock were caught unaware. Blinding white-out conditions engulfed the region, and by nightfall, some of the coldest air ever recorded plunged the plains into double-digit below zero temperatures. Many of those stranded by the storm were schoolchildren and their teachers. This is why the blizzard has come to be called the School Children’s Blizzard. Many children survived due to the diligence of their teachers, but as the snows melted, nearly 500 storm victims were discovered, many of them children. This true-life adventure story is made accessible to children through Donald Lemke’s outstanding graphic novel. Additional materials introduce readers to “cats,” “twists,” “St. Elmo’s Fire,” and a song remembering one of the teacher-heroines of the storm of 1888. 2007, Dutton Children’s Books, Ages 8 to 10, $18.95. Reviewer: Louanne Jacobs (Children’s Literature).
ISBN: 9781429601573 Updated 7/1/12To stay up to date on new books by this author, consider subscribing to The Children’s Literature Comprehensive Database. For your free trial, click here.If you’re interested in reviewing children’s and young adult books, then send a resume and writing sample to marilyn@childrenslit.com.Back to Top