Donna Latham   Trash. It’s all around us. Any place you encounter groups of people, you’ll discover mounds and mounds of garbage. In the United States alone, we generate about 210 million tons of trash a year. We toss out and throw away disposable products all the time. But where is “out?” What does “away” really mean? And what happens when we run out of “out” and “away?” The battle against trash begins with the reader.   Kids become “rubbish warriors” in Garbage: Investigate What Happens When You Throw It Out with 25 Projects. Encouraged to think about the choices they make that generate garbage in the first place, readers, aged 9-12, learn ways to reduce, reuse, recycle—and rethink their actions. Along the way, kids explore the science of garbology, discover fascinating information archaeologists learn by excavating middens, and use projects to investigate the world of trash. Activities include whipping up a delicious edible landfill, brewing natural dyes for a T-shirt, and comparing the effects of commercial and homemade cleaners.   Science and fun combine in Garbage: Investigate What Happens When You Throw It Out with 25 Projects to form an engaging learning experience that is sure to capture the attention children, parents, and teachers alike.About the Author: Donna Latham is an award-winning author and playwright and a lifelong nature lover. Donna received the ASPCA Henry Bergh Children’s Book Award for Fire Dogs. She is a member of the Society of Children’s Book Writers and Illustrators and the Society of Midland Authors.Interesting Facts about Garbage 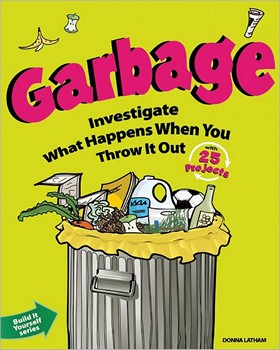 Garbage: Investigate What Happens When You Throw It Out

One of thirty-one in the “Build It Yourself” series, this edition focuses on informing elementary students of the impact that garbage is making on our world and provides directions on twenty-five short projects students can use to “reduce, reuse, recycle, and rethink” trash. A brief, informative introduction alerts readers to the impact that trash is making on our world. Going beyond just being litter conscious, the book informs students about the amount of garbage we generate, the valuable things discarded, where trash ends up, as well as the danger of discarding hazardous materials. Twenty-five user friendly projects including direction and supplies needed reinforce the “reduce, reuse, recycle, and rethink” philosophy. An interesting layout with simple black and white illustrations, boxed Trash Flashes, Words to Know, and Did You Know features to keep youngsters interested. The workbook format is perfect for classrooms to take on this subject as a group. The hands-on approach to a largely ignored subject is appealing, as well. A glossary, index and source for further study are included. Of course, it is printed on recycled paper by a company committed to “green” initiatives. 2011, Nomad Press, $15.99. Ages 8 to 11. Reviewer: Meredith Kiger, Ph.D. (Children’s Literature).